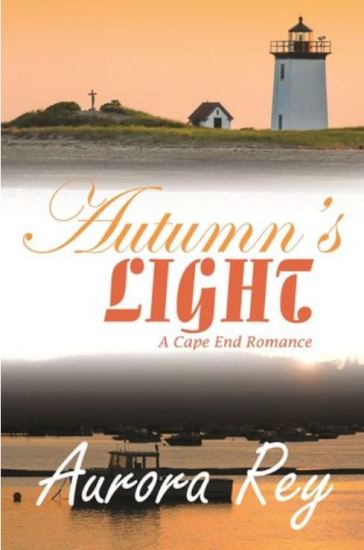 ‘Autumn’s Light’ by Aurora Rey is the fourth book in the Cape End Romance Series. This book tells the story of Mat Pero, a lobsterman from a large Portuguese family and Graham Connor, a naturalist who works for a company in Provincetown that gives daily whale watching tours and also tracks the migratory habits of the whales in the area. I use the term lobsterman even though Mat is a woman because in the story the women who work in this field prefer not to be separated from their male counterparts by a gender defining term. I like that.

Most of Mat’s immediate family have had issues over her sexuality, so Mat has lived most of her adult life thinking she would only have casual, short term relationships and that long term romance is not for her. Graham has been out of the dating scene for over a year, and decides to try the casual dating scene even though she does believe in and wants a long term relationship in the future. This is how the two main characters begin their relationship together. You can see from the start there will be conflict over this and of course there is.

Even though this is the fourth book in the series, I believe it can be read as a stand alone story. I think this because ‘Autumn’s Light’ is my first book in the series. You do meet the characters from the other books, especially the third book since it tells the story of Graham’s Aunt Nora and Will, who also play a secondary role in this book. The author, however, gives enough information in the story to cover what has happened in the former books. Readers of the former books will also get to catch up with characters they know and love.

This is a beautiful romance. I loved the flow of the story, loved the characters including the secondary ones, and especially loved the setting of Provincetown, Massachusetts. I would not call this a slow burn romance since the main couple get together and have sex fairly early in the story. That is a bit unusual for this kind of romance, but for this story it works well. The flow and growth of the romance is perfect here, and I loved seeing how the couple grow together even with the obvious pitfalls they face.

I also have to mention the other romance in the story; the one between Dom and Renata. They are such a lovely couple and I was so glad to see them falling in love.

Aurora Rey is an exceptional author. ‘Autumn’s Light’ is a shining example of her skills as a writer. I can wholeheartedly recommend this book to all romance lovers.

This book started out as a solid four stars in my mind. To get the fifth star from me, the book has to be one that I would read more than once. By the end of the story, ‘Autumn’s Light’ definitely had a fifth star.

I received an ARC from Net Galley and Bold Strokes Books for an honest review.