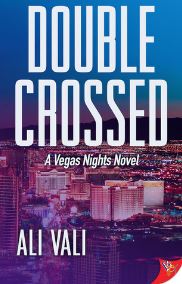 Just so you know from the beginning, I am an extreme Ali Vali fan. I have loved every single book I have read of hers, and I especially love the ‘Cain Casey’ and ‘Sept Savoie’ series, so when I heard that she was starting a new series based in Las Vegas, I was over-the-moon happy. After reading Double Crossed, I am still just as happy, if not more so.

For all of us die-hard Ali Vali/Cain Casey fans, this is the beginning of a great new series. We meet Reed Gable, a woman with a horrid past. She was put in the foster care and group home system at the age of five, where she quickly learned that she could count on no one but herself. As an adult Reed became a hit woman, stealing and killing for those who hire her. She relies heavily on her sidekick and back-up, Oscar, her only friend from her childhood. She kills without mercy until the day she finally reaches the one line she will not cross. That’s the day she meets Brinley Myers, the woman she has been contracted to kill. When she sees that Brinley is the mother of a young son (who is with her at the time of their first contact), she balks, but Brinley has already seen her and realizes what she is there for. But Reed’s past might be Brinley’s only chance for a future. Thus begins a complex and compelling tale that had me on the edge from the first page to the last.

This is also the story of mobsters, several family groups loosely connected to a major New York mob, with each family group trying to capture as much Vegas territory as they can. We also get to see the Jatibon family (from the ‘Cain Casey’ series) again since they are in Vegas with their own business. Though they are secondary characters in this book, it looks like we may see more of them in this series. I hope so, anyway.

There is violence in this book, and lots of killing, but there is also romance, love, and the beginning of a great new reading adventure. I can’t wait to read more of this intriguing story.

I received an ARC from NetGalley and Bold Strokes Books for an honest review.